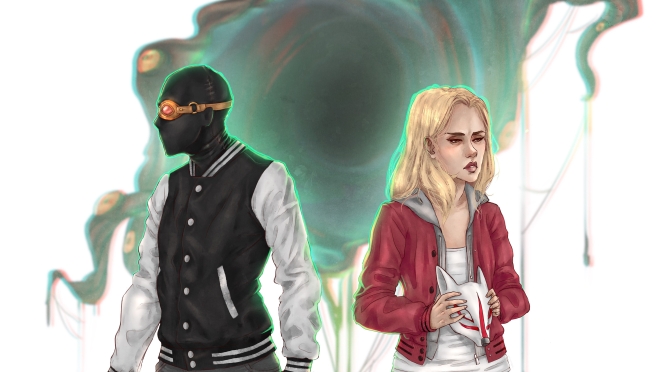 Pyre’s got bags under his eyes, and bags for clothes. He scratches at his arms above the sleeve as he looks down at the ping pong table, grimacing at the pictures of Tim Prince, Aspect, and the kids they slaughtered. “My group is called the Hammers and we’re led by Sledge. For years,we worked to keep traffickers from coming into the Texas Triangle and using one of the highways to move product from one end of the old States to the other. Houston was especially important to them, with I-10, the ports, and quick access to Galveston for the Gulf Coast area. We did such a good job that when FIS found us, they put us on a payroll, not in a prison.”

“How does Pandahead figure into that?” Iso asks. We’re all opposite the ping-pong table from this guy, as far away as we can be from a guy that confessed he came here to help our enemy.

Pyre’s trying to shrink his head into his shirt, like a turtle. “The Sanctified Remnant were our number one enemy for a long time. They were the best, the most organized. We had a lot of trouble keeping them back.” He pauses to scratch his arms again, and to gather himself. “When Pandahead started setting up shop, the Sanctified Remnant lost their fight. Pandahead made our lives easier. Not only that, but the number of drugs and people moving through our territory was a tiny fraction of what it was when the Remnant had free reign.”

“So Pandahead helped you fight the Remnant?” I ask.

Pyre nods. “One time even directly. His men helped intercept a massive crew with us. He used his power on them, and we cleaned up the stragglers with a small FIS strike team.”

“Why are you working with him?” Lugs asks.

“I’m not,” Pyre says, holding a hand to his chest defensively. “But Sledge and other Hammers are.”

We’re all huddled together on the opposite side of the table like he’s got a disease. I haven’t even had time to get properly introduced to the Biters. They’re considerably less fashionable than the Street Devils. Crane wears a large, yellow and black striped rain-coat, and an orange hard hat. He has a chain wrapped around his belt with a miniature wrecking ball at the end.

Echo looks the most designed of them all. Her outfit looks like a superhero’s costume, spandex tights underneath a trench coat she wore to hide it on the walk in. She has a full mask that looks like a stylized bat’s head. Very chic.

“Why didn’t you go with them?” Iso asks.

Pyre thinks about that for a moment. “I couldn’t, anymore. The Sanctified Remnant are bad. They still worship that Bella Villa dude. But I saw the clips of Pandahead shooting those kids. I thought that maybe Pandahead was a lesser evil. He’s just as bad.”

“Sledge thinks Pandahead is necessary,” Pyre says. “In that he kept the UWC safe from the Sanctified Remnant, among others. I don’t know that it has to be Panda, specifically, but he’s not wrong that Pandahead’s presence reduced Sanctified Remant’s to zilch.”

That’s true. The Cabellero Santo offshoot were the Remnant’s only presence in Houston.

Saw Off hacks her lungs out, and grins. “Was nice to see them get wiped out.”

“Tell us about the people you came with,” I say.

“There’s Sledge, Piledrive, Thunderclap, and Warspeed. And me, but… I can’t go back.” He meets me in the eyes, and I can see how scared he is. “Sledge will kill me.”

“You don’t think you could beat him?” Carapace asks.

“He told us about Sledge,” Crane says. “Said he was a nightmare.”

“Sledge isn’t a he,” Pyre says. “Sledge has perfect control over their own body, down to skin color and changing their gender. I don’t think they even remember what they originally were.

“They can heal any wound. Even fatal ones. I’ve seen Sledge grow their whole body back from half their head and a torso.” Pyre shudders. “They can shift their muscle around as they please, grow in mass if they consume food, and shed that weight just as easy. They can look like a child, and elderly man, and then turn into a hulk. All in the same breath, if they really exerted themselves.

“Piledrive is the next worst. He incorporates machinery into his body and can rearrange it to make new shit. Thunderclap can fly and create thunder blasts by clapping his hands. Warspeed can teleport, and create a clone of herself, but when she does that, they’ll try to kill each other after a few minutes.”

Pyre rolls the sleeves to his baggy shirt up, revealing the skin on his arm is gnarled, swollen, and pink. “I can shoot intense beams of fire. But if I go too hard, I burn my arm. I’m no match for the others. They’ll tear me to pieces if I go back. And, I can’t go back, anyway. I can’t be a part of that.”

We stand silent for a moment. A group of powerful masks here to help Pandahead, not us. Led by someone who can heal from wounds that would kill anyone else. “You said Sledge believes Pandahead is necessary?”

“Yeah, for a long time. Served in the Syrian Supers thing.”

“Did they have another name?” Mil-dot asks.

“Sledge not killing them, and a bucket of cash. Pandahead promised us a huge payday.”

“He’s waiting on a boat to take him out of country. Set up somewhere in the East, who cares where. Sledge planned on guarding him until he got set up, and then they would figure out how to take down Sanctified Remnant from where they were.”

So there is a plan. “A boat. How long until it gets here?”

Shit snacks. “Okay. That puts a time limit on us. And OPI. Do you think they know?”

Pyre shrugs. “Not unless the Hammers told them.” He pauses. “What’s gonna happen to me? Are you gonna turn me in?”

I shake my head. “No, we need you. You’re the only one that knows these vigs.”

Crane turns to me. “We’ll take him in for now. We could use a guy like him. I mean, I got strength, Echo’s got her screeches, Tamper and Sidestep both can get through any door. We don’t have anybody that can put out damage like that.”

“I just couldn’t do it anymore.” Pyre looks at me. “I came here because you’re the guy that took him down. If anyone has a chance to change this, you can.”

I don’t know what to say to that. The other masks look at me. They expect me to say something, like a leader. I’m the one that’s driving all this. “I… My goal here is to get a girl out of his grasp. Her name is Maisa. I’ll do everything I can to stop him, but her rescue is the most important.”

“Yeah.” Pyre rubs his nose with a scarred finger. “Well, I’m with you. All the way. You’re my only chance.”

Crap, now I feel responsible for him. “I won’t let Sledge hurt you.”

“Iso, what’s the plan now? Are we waiting for OPI to make a move?”

“Unless Pyre knows where they are,” Iso says.

Pyre shakes his head. “Nah. Broke off when we got to the city, before we met up with Panda. Sorry.”

“Then yes, unfortunately. Drone and I can search, but we’re also splitting our efforts on trying to find Flashfire, too,” Iso says.

Echo grins. “Gee, sounds like you could use some help. I don’t sleep but an hour a night, and I got my echolocation. I can help find your girl.”

Tamper and Sidestep step up next to her, on either side. Tamper speaks: “I can bypass security codes, I’ll start digging around networks.”

“Already on that,” Drone says.

“I can get in,” Tamper says, flexing his arm. “If you can get me to a login screen.”

“Weren’t we gonna have Bed-” I stop myself from saying her name out loud. “Our friend help out with that?”

Drone humphs. “I’ll take the fastest option.” Yeah, I’m sure that’s all there is to your reasoning, work wife.

“Whatever, this is probably easier. You two, work that out. See if you can find Flashfire or get a sense of what OPI’s planning. What can you do, Sidestep?” I ask.

“Squirm through doors,” Sidestep says. He rubs his head. “Sorry, boss, ain’t feeling well. Can I go out to the car?”

Crane nods. “Yeah.” He leans to me. “Bugger gets migraines a lot, and he’s had a doozy all morning. I think it’s part of his power.”

“Yep!” He grins and grabs the chain belt. “So long as I’m holding onto this wrecking ball. I keep it tied around my waist, usually, but I also swing it around.”

We chat a little more, but pretty soon it’s no longer planning or figuring out our assets, just shooting the shit. I’m exhausted. “So, when we have more concrete info, we’ll meet up again and plan an attack on Pandahead. Hopefully we’ll let OPI distract them. In the meantime, Drone, Iso, Echo, Tamper, Sidestep, and Remise will all hunt for his location, and Flashfire’s, as well.”

We exchange numbers all around, so Iso can text us all when he has confirmation of OPI’s plans. It’s all we can do for now.

Remise and Epione drop me off near the sky-rail, and I head back to Bedevil’s apartment. When I arrive, it’s almost late evening. I unlock the door to be greeted by PawPaw.

“Who’s a good boy?” I ask, rubbing his head. I set about the task of feeding her pets. Pawpaw’s dog food is right on the counter, next to his bowls. I make sure he’s got plenty of water and, according to the instructions on the side of the bag, two scoops of dog food. “You know, I’ve always wondered how these taste,” I say to Pawpaw.

He doesn’t respond, he’s too busy stuffing his face.

Well, if… if he likes it that much? Maybe it isn’t so bad?

I put one in my mouth.

It tastes roughly like I made a very stupid call here, and has the texture of gravelly sand in my teeth. I spit the kibble out of my mouth.

I look at Pawpaw, happily eating away.

The cats are harder to feed. They each need a half cup of wet food and a half cup of dry food, according to the paper next to the bags I find in the pantry. As soon as I start filling bowls, all five cats swarm my feet.

I manage to get their bowls on the ground, and they go wild.

While the animals eat, my curiosity takes over, and I peruse Bedevil’s entertainment center. She’s got a lot of documentaries, especially about sharks. There’s about five years worth of Shark Week from the Planeteers network. I chuckle and look at the back of movie boxes, hoping to find something to whittle the time away until I fall asleep.

Something jangles in one of them, like the cartridge is loose. I open it up to fix it.

A ring falls out. Rather, two halves of a ring.

I hold the fragments of a gold-silver band in my palm. The top is a small, brilliant diamond that shines in the kitchen light. The inside is engraved, and I have to put the pieces back together to read it: From Jamie, with love.

The ring is snapped at Jamie’s name and right next to the diamond.