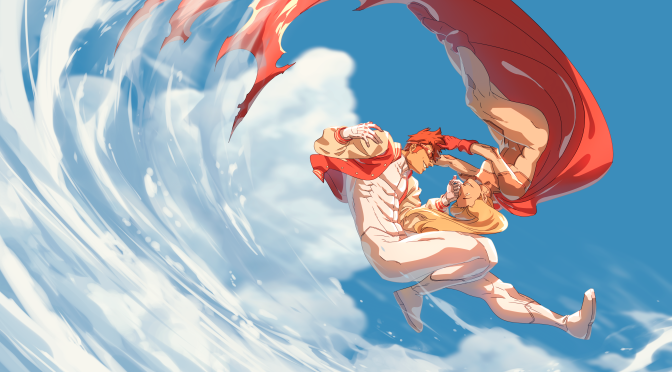 Templar knit his flesh. We did hours of CPR. Epione tried to bring back his Affect.

I yelled at his corpse.

Suppose there’s not much else to say.

There was no evidence in the house, destroyed by the earthquake Kassandra summoned. Both the Doppelganger clones are dead. The real Doppelganger was never even there, which was something I’d suspected. I’d hoped he’d show, but I’ve learned not to pin everything on hope. In the victory, some defeat.

Saw Off fended off an assassin from killing Archimedes, which would have ruined all of our suits and a lot of our gear. We brought Kassandra back to New Foundation. In the defeat, some victory.

I study her from behind a one-sided window with Templar. She resembles a woman crossed with a tiger, long red hair cascading over black and white striped fur. Her face is mostly human. She has bags under her yellow cat eyes. She slumps her powerful shoulders, and though she is free from Doppelganger’s mind-control, she does not look as happy as Paul did. Perhaps she wished she died instead. I empathize.

Archimedes and Epione sit with her now, questioning her on the names from Doppelganger’s list. She’s expanded everything we know about Doppelganger’s dealings exponentially.

Templar is unnerved by our new guest. She watches Kassandra through the glass, chewing on her lip. She shakes her head, almost in a daze. “You’d think after recognizing you as distinct from Megajoule, I wouldn’t have trouble separating this woman from the one I fought in Syria.”

“Weren’t you there for the Fear?” I ask.

“Yes and no. I still fought Kassandra and ended the war. I still saw what she did to cities she left in her wake. I still stood over her warped body, and watched her army throw their weapons down. And all this time, I never thought I was fighting a puppet.” Templar opens her mouth to say more, but then closes it. The look on her face reminds me of Bedevil’s, back when I showed her the video of Megajoule.

I seek to fill the silence, to find something for Templar to ground herself on. “Do you want to talk to her?”

Templar scoffs. “And what would I say to her? I’ve never met this woman. She is not the Kassandra I fought. There’s no catharsis here, no closure for me.”

I suppose that was a dumb question. “I mean, you could do what Bedevil did. You could fuck her and get her to marry you, and then install her as the leader of a new cape org. I’m sure that would be very cathartic.”

Templar takes that about as well as I could hope. She arches her eyebrow at me like I’m insane and snorts. “If nothing else, you’ve got your humor.”

Humor to mask pain. I shrug and we fall silent.

After a little while, Archimedes and Epione leave, but they make a pit stop in the observation room. Archimedes beckons me over. “Look alive, Gabe. She wants to talk to you.”

I didn’t expect that, but it makes sense. We share a creator. I’m sure to her she feels that makes us siblings, as much as I felt that made Paul my brother. How could I explain that’s not what bound us together?

“How much did she give us?” I ask. “Enough to clear us from President Genz’ shit list?”

“As deep as you dug us into that shit list, yeah. She handed us a shovel. She confirmed all the names we knew and gave us more. She knows deals, she knows hideouts, she knows way more than we knew. Linear’s already coordinating teams, so don’t you worry your pretty head about that.” Archimedes pats me on the shoulder. “It’s nice to know that no matter how bad you can make things, I can always count on you to fix them, too.”

I narrow my eyes at him. “Thanks?”

“You’re welcome,” Archimedes says. “Get in there, champ, and see if she’s got anything else for us.”

Kassandra perks up as I enter the interrogation room. She stands up to greet me, though shackles bind her to the table. I nod and sit across from her.

Strange to see the genetic modifications Doppelganger made to her up close. She’s even more different from the original woman she was made from than I am from Megajoule. A tigress geomancer.

Maybe, once all is said and done, she’d make a good team mate. Time will tell on that.

“I think we’ll take you out of those soon.” I point to the cuffs. “I wasn’t in charge of that.”

“I understand. I was his right hand,” Kassandra replies.

“He has many right hands. His plans do not hinge on me. They didn’t hinge on Paul, either, though you did deal him a sore blow in India.”

I click my tongue. “You know a lot about his work. How do I know you aren’t just a plant? Another trap from dear old dad?”

“Have your empath read my mind,” Kassandra replies. She leans over, showing me her teeth — her fangs. I don’t need to have Cynic’s power to know what she’s thinking and feeling right now. She hates Doppelganger, possibly more than I do.

Actually, certainly more than I do. She was essentially his slave. “Fair enough. Why did you want to talk to me?”

Kassandra struggles to speak. She retreats back to her chair, stammering for words. It takes her a few seconds to compose a sentence. “When you first announced yourself to the world… he wanted to claim you. That’s why he visited, why he never tried to kill you.”

“He’s not going to stop what he’s doing. He’s not going to stop trying to correct you.” Kassandra’s words quicken, as if she can’t speak them fast enough. “But you have to understand this, Gabe. He can’t clone from another clone. So if he can’t fix you by convincing you, he’ll do the next best thing.”

I realize what she’s getting at. “He’ll kill me.”

“Russia,” Kassandra says. “He’s going to Russia. It was his next greatest stronghold outside of India. He’s replaced half their senate and most of their superhuman administration.”

I chew on that bit of information. Two Hellpact states fully under his control. “Does he have Japan, too?”

“He started work on it,” Kassandra says.

I don’t know what his aim is, but clearly it involves the Youxia somehow. Maybe it’s time I turned my attention to China. I’m not sure where I’d even begin, or what I’d look for, but if Doppelganger wants something in there it might be instrumental in beating the Fear. I’ve got to keep in mind that is his end goal.

“Are you okay?” I ask Kassandra.

A question she didn’t expect, so she doesn’t have an answer prepared. She nods. “I’m free, I guess.”

“I spent so long with fake thoughts and feelings that stamped out my real thoughts.” Kassandra picks at the cuffs holding her to the table like a bracelet or a wristband. Not like she’s trying to free herself at all. “The moment I woke up and Doppelganger’s thumb was out of my brain, my conscious was screaming at me. Is that any different from Doppelganger’s voice in my head?”

Maybe there is something between us besides Doppelganger. Perhaps he created a familial bond between me and this woman, a strange sibling connection he didn’t intend. “When I was younger, I used to hallucinate about Megajoule. I felt like everything I did was because of him. Every thought in my head I picked to pieces because I couldn’t trust my own mind. I had all these questions about myself and I was afraid the answer was exactly what I feared. That I did not belong to myself but to someone else. That the voice inside my head was not my own.”

Kassandra doesn’t reply to my story. She loses herself in thought, so I take my leave, and tell her to call for me if she wanted to talk more.

Yes, I can see this woman working with me. I don’t know what that future looks like, but it wouldn’t be the first time I’ve learned to work with a former enemy.

With nothing else on the docket for the day, I wander New Foundation and try to find something to occupy my time until Archimedes convenes the Inheritors for a debrief. Not knowing when that will be, I decide to get ahead of the curve and stop by the command room.

I am alone with the whirring monitors, the quietly updating stream of news on the main screen, and the rough-hewn stone table where demigods and heroes have conferred. I take my seat somewhere in the middle and stare off into spaces. I lean back into my chair and prop my feet up on the rough-hewn stone table. Dwelling on the last few days, on victory, on defeat, and on Paul.

Bedevil appears in the hall, lingering at the threshold of the room somewhat like a ghost. She studies me for a moment before approaching and sitting in the chair next to mine. Without saying a word, she holds out her whole left hand for me to take. She’s wearing the ring I made for her.

I sit up properly and take her hand in mine.

It’s been some time since I really looked at her. I take stock of what she looks like now, how she’s different, how she’s the same. Somehow, she looks younger and brighter. As if she got a good polishing in the last year. Her eyes have a bit of shine, though they’ve always been golden and beautiful. She wears her red dress jacket as if it were her cape costume. I still feel like she could lift towers in her work attire.

I clear my throat, wheezing out air that feels like it’s sat too long in my lungs. Like I’m opening a tomb. “I love you.”

She squeezes my hand. “I love you. Shall we get married?”

Her offer takes me by surprise. We’ve not really had time to sit down and talk since we came back from California. “Now?”

“Yes.” Bedevil smiles at me.

“Why do you want to do it now?” I’d go with her now, right this very second, but she was the one who thought rushing to get married wasn’t a good idea. “Don’t you want the big wedding and everyone there?”

“I want you.” Bedevil opens her smile to show her teeth, a flower unfolding its petals in front of me. She leans down and kisses my hand, and then sits back up. She reaches across the table with her maimed hand and strokes my cheek, staring into my eyes. “Everything else is bells and whistles for me. Take me to the mountain and make me a new ring, and I will make you one, too.”

“You don’t want Longinus to wed us?”

“We can swear vows before the sky and the earth.” She pauses, a sly grin on her face. “And Pawpaw.”

“That would be the most sacred of vows.” I chuckle. “Should we bring the cats, too?”

Bedevil guffaws. It can’t be overstated that I love her goofy laugh and smile. Once she settles down, she lets go of my hand. “Tomorrow?”

“Tomorrow,” I agree. “I’ll take you to the mountain. Could we bring someone with us?”

Bedevil nods without hesitation. “So long as I can bring someone, too.”